2021 Titles achieved by our members and their dogs

At Eastern, we recognise our members in a number of ways. Throughout the year members are awarded through effort either by announcements, in the GSDCV monthly magazine, by highlighting their efforts down the ground or through Certificates and trophies. It’s true that many members do things that go unnoticed. We accept this as with everything else, we do it because we love the breed and our club. It is however, nice to occasionally be recognised. For those that we missed, you have our deepest thanks.
Please note that we have a “Red Book” down the Branch for people to note down stories and or their own achievements. Please use it.
The following recipients note our special thanks. Barbara Stewart (an Instructor at Eastern) has successfully attained with her bitch, “Verhexen Aladdins Almondine” RA,(Amber) their Canine Community Dog Title (CCD).
They achieved this Title by obtaining their 1st pass at Hastings and District ODC on the 18th June, 2016 with a score of 90 points – 3rd Place.
Their 2nd Pass was also at Hastings and District ODC with a score of 87 points – 2nd Place.
3rd pass at Northern ODC on the 11th September scoring 92 points – 3rd Place and CCD Title.
This team are currently training for the next level of obedience, CD (Canine Dog) title. Their final 3rd Tracking Test Pass and Title was achieved at Inverleigh on the 20th August, 2016.
Her Title with Mister was due to her constant training and efforts on early Sunday mornings at our Club and other venues. It really does take dedication on a handler’s behalf to succeed at tracking.
Congratulations Mary and Mister.
Following on with her success, another member of the family, Norman Hawthorne (also an instructor at Eastern) has achieved two Tracking Test passes with his dog, “Bodecka Carbon Copy” (Thaes).
Their 1st Pass was at Dromana on the 14th May, 2016 rated Excellent.
Their 2nd Pass was at Inverleigh on the 13th August, 2016.
Norm and Tay will no doubt achieve in 2017 their Tracking Dog Title. Roll on 2017.

One of our members, Bharat Vyas achieved their 1st Tracking Test Pass at Ballarat on the 10th September, 2016. Another team which will undoubtedly achieve their goal a TD Title in 2017. Cathy Workman and Jayshell Ghan (Ricky) achieved their Endurance Title at Cherry Lake in Altona on the 18th June 2016.
Ricky can now be known as Jayshell Ghan CCD ET.
Congratulations also to Richard Oldfield and Teufelberg Hatts Off To Gus (Gus) who also achieved this Title. Cathy did it the hard way running whilst Richard was cycling. Whichever way you look at it a job well done to these two teams.

Gus is owned by Richard Oldfield Schaeferhund Nelke (Nelke) owned by John Schulz and Helena Walter was placed 4th Open Bitch under Louis Donald (SV) at the ACTGSD Championship Show on Sunday October 2nd, 2016.
Congratulations to all on a great show and to Wendy Blunt for yet another excellent job handling Ms Nelke. Schaeferhund Nelke (Nelke) owned by John Schulz and Helena Walter was placed 4th Open Bitch under Louis Donald (SV) at the ACTGSD Championship Show on Sunday October 2nd, 2016.
Congratulations to all on a great show and to Wendy Blunt for yet another excellent job handling Ms Nelke.

Under Helena’s guidance Ms Nelke, who is now 11 years old,  attained her Rally Obedience Championship after her retirement from the Show Ring The only problem we ever had with him was when he was a puppy and he didn’t want to eat, food didn’t matter to him! But, he would do anything for praise, he loved to be a ‘good boy’.
This came in really handy in his trial career, in fact, in his first ever trial he received a round of applause from the other competitors because when they left their dogs for the ‘sit and down stays’ their dogs all followed them leaving Schaefer in splendid isolation, being a good boy.
He worked his way through the obedience levels and, when he gained his Obedience Champion title found that they had invented another one – U.D.X
Who says that you can’t teach an old dog new tricks?
He went on to be one of a small group of die-hard ‘old timers’ who took on the challenge of the new level and gained their titles.
He was one of the first dogs in Australia to gain a ‘Grand Champion’ pass but he was eleven and a half by then and retired gracefully.
He kept his spot in the Demo Team and even made guest appearances with the team at the Royal Melbourne Show last October aged thirteen, and again at Kew Primary School fete in November.
Sadly in December he left us!
The Schaefer Medal is a lovely way to remember him and to remind us all that a dog can be a great friend, a good worker and a perfect gentleman.

Thank you Mary and Norm for sharing these great insights into your wonderful friend and companion and for keeping his memory alive through the annual Schaefer Medal. 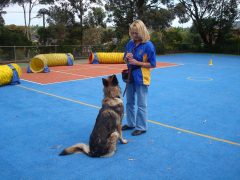 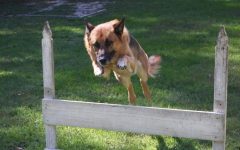 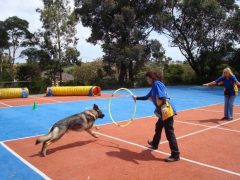 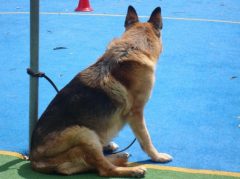 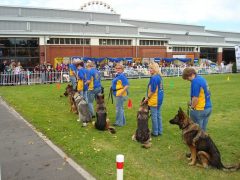 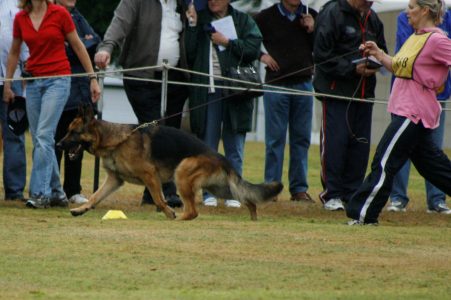 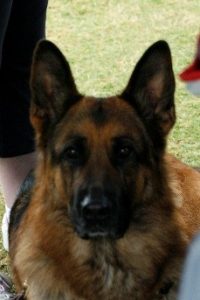 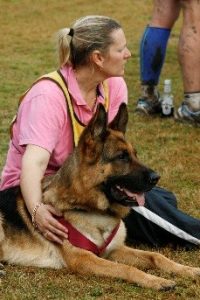